Has anyone considered using Particle Beams to scan a closed book layer by layer?

I was thinking of using a Beta source, then amplifying its penetrating power and directionality with a rising and collapsing electromagnetic field.

It would be tuned to both reject and re-enforce the penetrating depth so it would fit the depth of the book.

I think it would be small and look like an inkjet cartridge on a printer and scan back and forth.. the book would be pulled or pushed in the other direction.

The data would be collected by particle sensor either on the scan head for back scatter or around the book and combined with the scan head position data to reconstruct the printed pages in a computer program.

A radioactive source should produce higher energy particles than could be conveniently generated on demand.

I was just thinking the backscatter data should be rather uniform and rather like a flashlight with a depth control "Reflect" off the ink on different pages with a fine degree of control. To call it a CAT or PET scan really would not be accurate.. a type of X-Ray might be more accurate.. but the same degree of detail is not required. Print and Drawings are relatively large and fairly high contrast.

When you think about it its not that different from an old fashioned electron gun Tube Television scanning a pattern and producing light.

It would just be the electron gun would have a far greater degree of punch.. and the picture would make Slow Scan TV look speedy.

Inks are selected for printing precisely because light raises and lowers electrons in atomic shells or interact with the electrons in ink differently than the surrounding media (the paper).. and a book is a rather large layered "sandwich".. not unlike a large Integrated circuit or IC.

Regardless of their intended meaning.. the shapes and curves of characters are a type of Photonic storage media, just as the Pits and Divits of a CDROM. That a page might be "read" by an electronic brush is an interesting idea.

It would be ironic indeed if there were a way of exciting the atoms or electrons in just the Ink to somehow make them emit a signal like a magnetic resonance imager.
-- Never mistake a Clear path for a Short run --
Top

The pages of the book are nonconducting, so I suspect the "lightning bolts" shooting through it when the charge builds up would fry it. I saw a piece of plexiglas with some pretty discharge patterns when a proton beam was shot into it.
Top

Well.. I wasn't exactly envisoning one of those 'Eye of the Storm' or 'Tesla coils' flinging bolts of lightning.

The eV would be high, but the coulombs or amperage would be very low.. it would be as subtle as a spectrographic analysis with X-Y and depth information.

I do see what you mean however protons are much more massive.
-- Never mistake a Clear path for a Short run --
Top

I don't mean that you have to send a bolt of lightning into the book, but rather that the bolts would be coming out when the charge built up enough inside the pages. Since paper doesn't conduct electricity, it would continue to charge up until it arced out. The same thing happened with the plexiglas; it wasn't the protons that made the discharge patterns, but the electrons arcing in towards where the protons were building up in the plexiglas.
Top

I noticed a really cool description of PiN diodes being used as X-Ray, Gamma and Alpha, Beta particle detectors.

I also read of a recent Kickstart project that used that effect to build a sensor as an add-on component for arduino or adafruit projects.

They have a side business for robot parts and make the sensor, and a radiation source available (alpha, beta and gamma source) here:

Particle decays are on the order of 2500 per second.

So mind you some calibration of the natural radiation "beam" would be necessary, perhaps to attenuate (depending on the sensor data rate) and perhaps collate using something like a metal tube.. to refine the beam.

I'm thinking to simplify and do a proof of concept perhaps all that is necessary is to put a solenoid around the radiation source, and the sensor/detector on like a "U" shaped tuning fork.. then move it back and forth in an X-Y array pattern. With the book inserted in between the two arms of the "scanner".

Its a whole lot of "if" and "maybe" to be sure, the ideal beam would be beta radiation since that is made up of electrons and could be focused and pushed or pulled by the magnetic field of the solenoid.

X-Y coordinates would determine where the beam was perpendicular to the book.

Solenoid resonance field would drive the depth of the beam cyclically up and down through the pages of the book.

The result would be a "particle-cloud" of three dimensional scan data.

The real problem after that would be perhaps "duplicate scans" with a deliberate "offset" to generate parallax, so that interference patterns from multiple over lapping ink spots that make up characters on different pages of the book could be resolved and cancelled out. -- there might be a simpler solution to this.. but for now I'm just falling back on the patent descriptions for standard X-Ray Tomography.. that is "its not that hard a problem", "its done all the time".
-- Never mistake a Clear path for a Short run --
Top

I found a $300 XY robot that has a generic mounting carriage. The Youtube videos seem to indicate it has the resolution that would be required to digitize some pretty small fonts.

The idea would be to make this "atomic" depth sensor to ride the carriage back and forth, stepping it along and letting it cycle to collect pseudo spectrographic data on what is beneath it in the book. Then reconstruct the page information as a series of layers.

First test would be with a single page of paper with writing on it, then increase with multiple layers until reaching the depth of a paperback or real book.. then graduating to things like hard cover books. 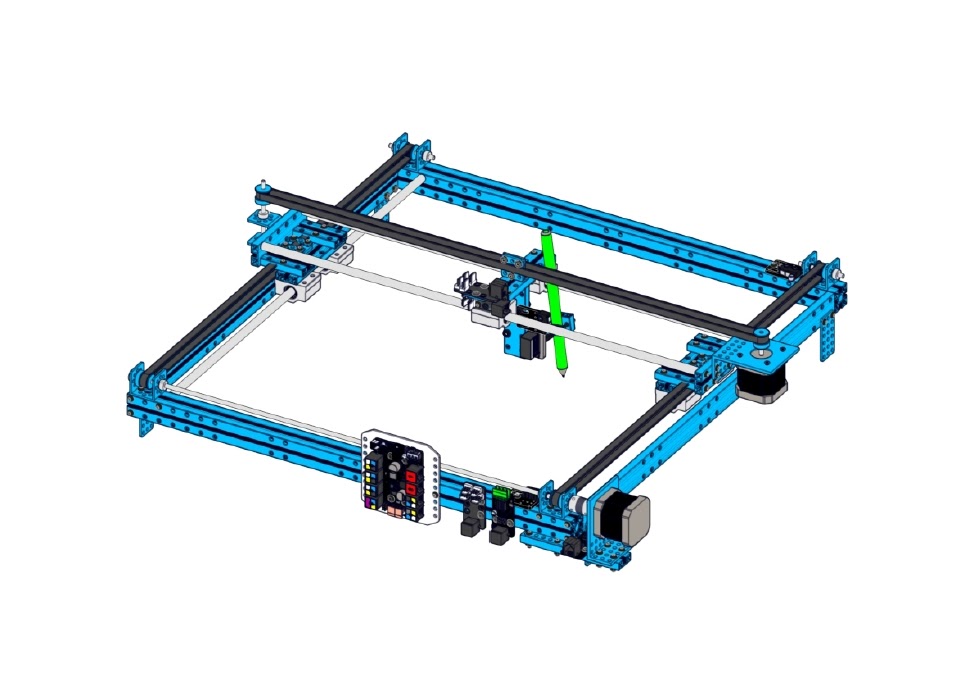 Obviously higher levels of radiation would make scanning faster and more accurate.. but might be more hazardous to people, and harder to obtain the radioactive materials to enable the depth sensor. The radiation source would also be subject to "dimming" as all substances have a half-life. Fortunately the half life of many that are obtainable are on the order of a couple decades.. anything with a shorter half-life tend to be hazardous materials kept out of the hands of ordinary people (for good reason).

X-Ray tubes are just not practical, and the fly-back transformer approach just too error prone.. hence dangerous. TerraHertz looks very promising, but way too expensive for now and probably at least 10 years away commerical-wise.

One thing I have not thought about though are colored print photographs, drawings and diagrams should work fine.. but the dyes used in print photography probably would generate some subtle and hard to figure out signals. The one advantage there is colored and varied print photography in books was rare up until the last half of the 20th Century.. and low cost books for the masses were more likely to be single ink editions.

So perhaps tackling the scanning problem by partitioning those books that can be scanned this way versus those that cannot would be appropriate. Choose the tool best suited for each.
--

I guess whether its alpha or beta doesn't matter that much.. alphas might be driven deeper.. just as betas into the material by an oscillating magnetic field.. sort of like a sewing machine needle. I'm also reminded of the needle in a vinyl record player reproducing sound. This would work on a similar principal.. "playing" the signal of the print characters like "notes" in a musical composition.

Forescatter would pick up any gamma rays as well.. backscatter probably would not.

A monochromatic source would be more ideal.. but I don't have a synchrotron radiation source handy.
---

Static discharge might be a problem.. but alpha radiation is (+) where beta radiation is (-) the net may not be even, but it also may lessen the build up of a charge.

Books are also not totally devoid of "charge" leakage.. unlike Bejamin Franklins Lyden Jar.. books are very poor batteries.. so they leak like a sieve.. I would think a static discharge table, or a conductive mat would further held keep things even. (If) the radiation source were that powerful to begin with.. we don't often see Uranium mines throwing bolts of lightening from on mountain high like Zeus or Thor.. so I think we're probably pretty safe the book isn't going to be atomized or go up in smoke.

Would that Uranium mountains did throw bolts of lightening.. they would be far easier for prospectors to find.. and Einstein might have been some poor chap in Grecian times.
-- Never mistake a Clear path for a Short run --
Top
Post Reply
6 posts • Page 1 of 1

Return to “R&D and New Technologies”