A place to introduce yourself, and to meet other awesome people.
Post Reply
438 posts

My name is Steven and I dabble in programming (15 years, on and off) and system's administration. Also, I have a solution for world hunger.

, the publisher of a certain series of books has no interest in offering digital editions. I was originally going to slice the spines (while dying inside) to scan them, but couldn't bring myself to do it. I searched for alternatives and, to my delight, came across this site. My birthday passed recently and I told my brother and dad that all I wanted was a book scanner and that series of books scanned. (clarification: I'd do it all myself, but I'm a quadriplegic, so... yeah)

My goal here is to learn what my dad needs (other than cameras) to build an inexpensive book scanner--or, what it would cost to have someone build one.

With that out of the way, I proudly present the solution to world hunger: dung beetles!

For those not in the know, dung beetles feast on feces for their energy. While far from appetizing, dung beetles' digestive tracks almost certainly contain an enzyme that "eats feces and craps glucose". (Glucose being the primary energy source for our bodies, naturally.)

So, the theoretically simple goal is to create a synthetic bacteria that replicates the feces->glucose conversion. Injecting the bacteria into human digestive tracks will allow us to eat smaller portions while receiving the same amount of energy we do from meals today.

The decreased food consumption (among industrialized nations) caused by the bacteria's introduction would leave suppliers with a glut of food they can't profit from, so there choice is to sell it at a loss, discard it, or donate it. With the proper incentives (e.g., tax credits), the suppliers will choose to donate the food instead of losing money.

With that, world hunger is solved.

So ends my introduction.

Hey all, I am Balian from Indonesia have interest in this new idea using camera to scan a book. I hope my English is sufficient enough to follow discussion here. Thank you Administrator for accepting me as a member of this forum.
Top

Hello,
I'm a network engineer with an unfinished history degree that I plan to start working on again as soon as time and money allow. I love books and have thousands in my house. I like old books, sewn binding, leather and all that. Before perfect binding and the crap that passes as a book today. My interest in history lies in the Ancient world and the Middle Ages. There is a wealth of information that is not available to the common man so I have been scanning off books for almost ten years now. I scanned off a 1560 Geneva Bible and that was one of my largest projects. I have scanned hundreds of books since then. I am building a book ripper because it will allow me to scan books that I have not scanned in the past because they are expensive and fragile, so I don't want to press them on a flat bed scanner.
Top

Hello, my name is Fuzzy, I live in Ft Collins, CO. I do work in early arts and crafts (mainly blacksmithing demos/classes) but I've amassed many different and obscure books. Some of the knowledge I've acquired is from borrowed or library books, and it would be great to use this system to archive these things before I am in a place where I can't borrow them anymore.

Question: Is there a place that people are posting their scanned books (out of copyright, of course), or at least a list of the titles? It would be nice to be able to share especially some of the older out of print ones, or perhaps team up with Google books or Gutenberg project for something like this.
Top

Welcome to the forums, everyone.

Fuzzy, Archive.org is the free, open place to share your books. I hope that one day our forum and people become big feeders for the Archive. Here's the FAQ addressing your question. Here's an example of how nice their interface is. I just want to say that I would *love* to read such books and see them freely available, so I hope we can help you get a scanner going.
Fast prototyping and shop tips videos from Daniel on YouTube.
Top

just starting my build. my background is in imaging devices and i have alot of cool junk at my disposal. hoping to turn some of it into something great.
Top

Welcome! Between fbonomi and I, we have a lot of interest in the camera/capture end of things. I also have some cool junk at work -- a photometer and spectroradiometer, among other instruments. What do you have handy? Maybe we can sort out some best practices, although the project as a whole is, I think, in a "good enough" state.
Fast prototyping and shop tips videos from Daniel on YouTube.
Top

daniel_reetz wrote:Welcome! Between fbonomi and I, we have a lot of interest in the camera/capture end of things. I also have some cool junk at work -- a photometer and spectroradiometer, among other instruments. What do you have handy? Maybe we can sort out some best practices, although the project as a whole is, I think, in a "good enough" state.

I have access to glass platens, stepper motors, ccd arrays and cis scanners with high speed scanning capability of about 1page/second 1600x1600, seperation drives rollers and pads I was thinking of using to develop an auto page flipper (wishful thinking), and a few other odds and ends.
Top

Hello,
I'm a physics teacher from France (girls and boys from 12 to 16 yo). I own an engineer diploma in plasma physics, but I'm too lazy to work in the "real word"...

I'm really in love with dictionnaries, and I dream of being able to carry some of my favorite on the beach...

Le Robert culturel, (one of) the better French langage dictionary, 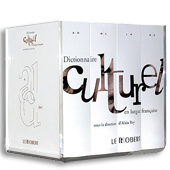 or Le LittrÃ©, a so literary dictionary,

or Le dictionnaire de l'argot de l'X (slang dictionnary of a high-end college - Ecole polytechnique), so pleasant, or... or... ...


So I would like to digit some of them (Le LittrÃ© is yet digitized... a 1870 work) , and a lot of others rare or curious or near perfect books in order to read them on an ebook reader.

Not for tomorrow (these are 5000 pages-dictionaries... a long work to scann and I think the eBook reader will explod, I will begin by thinner books), but that's a pleasant dream !
Top

Cheers! Another dictionary lover! One of our other members, Fbonomi has put many Italian dictionaries online.

When I was in grade school, I was the biggest nerd in the class. Once, the teacher, in a fit of frustration over bad spelling and poor word usage, asked the whole class "What do you do if you don't know the meaning of a word or how to spell it????!!!"

The class answered in unison:

I was embarrassed and proud all at once.

Return to “Introductions and connections”